The flex offense is a popular basketball play that involves movement and continuous passing in an effort to create scoring opportunities. It is known for its versatility and ability to be run effectively against man-to-man and zone defenses.

This is one of the oldest plays in the book and is still used today by some succefull teams because even team´s that no it´s coming have a hard time guarding it.

What is a flex Offense in basketball?

The flex offense gets its name from the offense being "flexible" with it´s players, having all 5 players running in the same motion makes all 5 positions "flexible". The Flex offense is a constant motion of players around the court. It involves players cutting, screening, and moving without the ball to create openings for their teammates.

One key element of the flex offense is to have players that are capable of passing, shooting, screening, and moving well without the ball. This is a great offense to use with high IQ players.

How to run flex offense in basketball

To run the flex offense, the point guard starts the play by bringing the ball up the court and making a pass to a wing player. From there, the wing player has the option to pass to the player coming off of a cross screen, or waiting for the point guard to set a pin down for the big who just set a cross screen. So the ball can either be passed for a layup, or to the big at the top of the key to continue the motion offense. 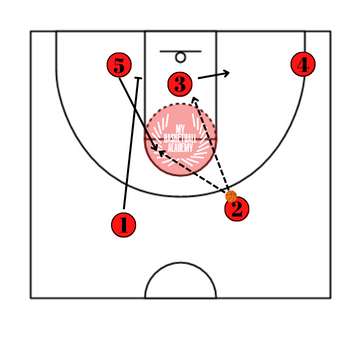 This is just a continuos motion offense. Trying to get an easy layup, or pass to a teammate for an open shot. 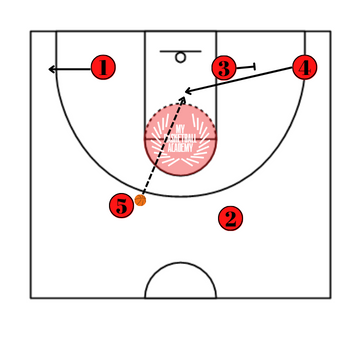 Who should use the flex basketball offense?

The flex offense can be effectively run by teams at any level, from high school to the professional ranks. It is a good offense to use for teams that have players with good ball handling skills, with the ability to make good/accurate passes, as well as players who are good at cutting and setting screens.

Can you run flex offense against zone defense?

Yes, the flex offense can be run effectively against zone defense. Because it involves constant player movement and passing, it can create openings against a zone defense that is trying to clog passing lanes.

By using flex screens and flex cuts, offensive players can create space for themselves and their teammates, making it easier to pass and shoot against a zone defense.

Who invented Flex Offense in basketball?

The flex offense was first popularized by former Maryland head coach Gary Williams, who used it to great success during his tenure at the school. Williams learned the offense from his mentor, Dean Smith, who was the head coach and all time great at the University of North Carolina.

LEARN MORE ABOUT THE APP

However, the origins of the flex offense can be traced back even further, to former Brigham Young head coach Stan Watts, who is credited with developing the basic flex sets or screen the screener action.

What is the easiest basketball offense for youth?

There are many different basketball offenses that can be effective for youth teams, depending on the skill level and age of the players. Some of the easiest offenses to teach and run at the youth level include:

Overall, the most important thing for youth teams is to choose an offense that is easy for players to understand and execute, and that fits the strengths of the team.

Flex offense is a versatile and effective basketball play that involves constant player movement and passing to create scoring opportunities. It can be run successfully against both man-to-man and zone defenses, making it a good choice for teams at any level.

The flex offense is a continuity offense, meaning it does not rely on set plays but rather on the movement and passing of players to create openings. It was popularized by former Maryland head coach Gary Williams, but its origins can be traced back to former Brigham Young head coach Stan Watts.