The 2-3 zone is one of the most popular styles of defenses in basketball. After man to man defense, it is probably the most common defense.

It is played typically with the point guard and shooting guard at the top of the defense, and the wings, forwards, and center at the bottom. 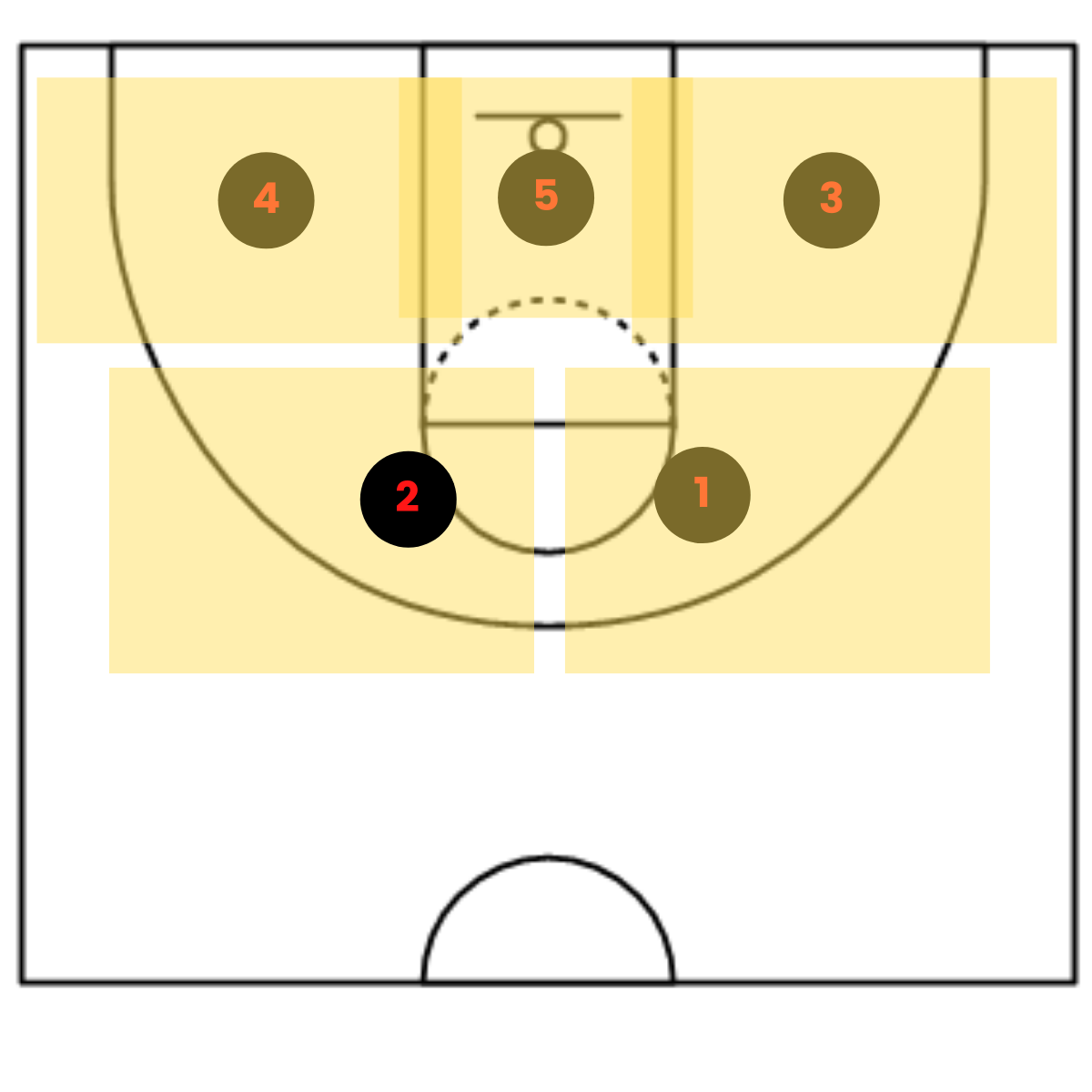 This style of zone is something that is shown to be productive almost every year come March Madness.

Teams that play 2-3 zones are able to throw off opposing teams by playing a different style of play than other teams. And teams that are able to play multiple defenses are able to do the same.

Here we are going to talk about the basic movements and positioning of a 2 3 zone, and how you should begin to teach and learn it.

Of course, you can adjust this as you see fit according to personnel.

There are some keys to the zone that each team needs to do in order to run this defense efficiently.

Teams must play with their hands up in the air: Passes look less open when hands are consistently in the air, and players will have a greater chance of getting steals this way too.

Teams must talk: It has to sound like there are 10 players on the court, telling everyone where to go, where to force the ball. This will frustrate the offense and help the team play with energy.

Move quick and fast: Just because this isn’t a zone doesn’t mean its a time to relax. You should play with the same intensity as if you were playing man to man. This is a common mistake with many zones and is the reason why some are ineffective.

Gang rebound: Rebounding is one of the hardest things to do in zones because sometimes the zones can get distorted. When this happens you need all 5 players trying to box out and get rebounds.

There are two guards in this defense and they have the responsibility to cover everything from sideline to sideline and above the high post area. 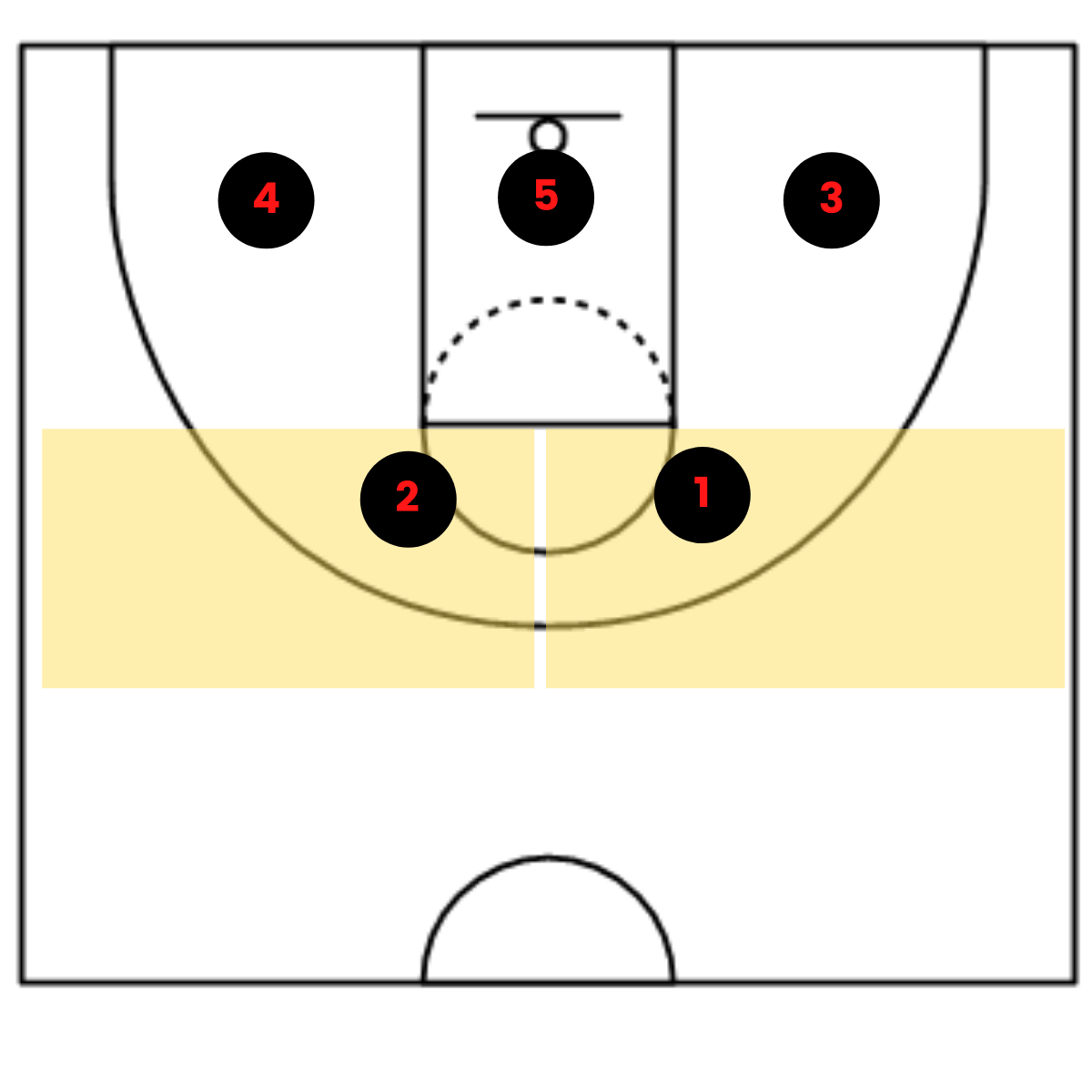 When the ball is at the top of the key both players will guard it collectively. Not allowing a dribble penetration and close enough to make the player not want to shoot. Some coaches try to deny the pass to the wing, keeping the ball in the middle. This could turn into a 1-2-2 defense.

If the ball is able to get into the high post, which should be extremely difficult for the offense, the center needs to come up and play one on one with them.

When that happens the guards will “fan out” and guard the closest offensive player to them.

When the ball gets into the low post or short corner, the guards will keep their normal responsibilities and guard areas above the free throw line extended.

There are two forwards in this defensive that will play on both sides of the center and behind the guards. They are responsible for the lane line out towards the sideline, and below the free throw line extended.

When the ball is at the top they will be ready to close out on any pass that is to the wing. If the ball gets to the wing and there isn’t an offensive player in the corner they will stay on the ball, forcing them back to the middle.

If there is a player in the corner, the guard is responsible for bumping them back into a help side position so they can guard the corner and be in help.

This is why it is important to not let the ball get into the high post.

If the ball gets into the low post the forward can dig down and double or they can just guard the pass back out to the wing and deny the ball reversals. This is all about preference of the coach and how aggressive he wants the team to be.

The center is the goalie of the defense. Responsible for protecting the rim and talking every one through their defensive slides.

When the ball is at the top the center will play in the paint, guarding anyone that may be in their area. When the ball gets reversed to the wing, the center is responsible for the low post.

If the ball is in the high post the center is responsible to guard that player one on one, trying to force them into the help of the defense.

Same goes for the ball being in the low post, the center is responsible to play that player one on one.

The 2 3 zone defense is a great defense if you can play it well.

Teams like Syracuse made a living out of it, and USC used it during March Madness to get far in the tournament.

Either way its something that teams should be able to use in case of emergencies like foul trouble or when teams have multiple poor shooters on the floor.

We will talk again in a couple of days but for now... We have this article for you.